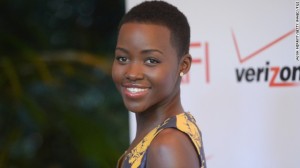 Since then, the award ceremonies and opportunities to dazzle photographers have been plentiful for Nyong’o, whose mesmerizing performance as Patsey earned her numerous accolades and recognition, including an Oscar nomination for Best Actress in a Supporting Role.

Though all this attention is new to Nyong’o, who was born in Mexico to Kenyan parents, the young actress seems to enjoy all the hype around her. But there is much more to her story than how she captivates the cameras on the red carpet.

CNN’s Stephanie Elam caught up with Nyong’o to speak about her journey from Kenya to Hollywood. An edited version of the interview follows.

CNN: How did you end up being born in Mexico?

Lupita Nyong’o: My father is a politician. At the time he was also a professor of political science and he was organizing for democracy in Kenya. We were under an autocratic regime and after a series of unfortunate events, including the disappearance of his brother, he went into political exile in Mexico. I was born in his last year there.

CNN: So you were born in Mexico but grew up in Kenya.

LN: Yes, all my conscious memories are in Kenya until when I was 16 my parents sent me back to Mexico to learn Spanish. I grew up in Nairobi, which is the capital of Kenya, so it’s hustle and bustle and there’s always something going on. I come from a very big family and we’re very close knit so I had lots of time with me family. 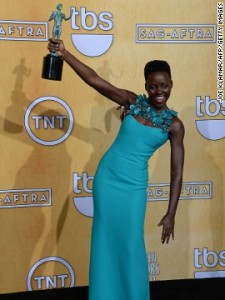 My parents raised all of us to just pursue our hearts’ desires. They were like “figure out what your purpose is on this world and then do it and do it to excellence; no matter what it is, whether it’s being a janitor or a doctor, as long as you’re filling your life’s purpose then we’re good.” No pressure to pursue one thing or another, although I will say my father was very upset when I dropped physics though.

CNN: Not too long after you arrived to Mexico you decided to go to school in the United States. One of the things I read about was your discovery of race in America and how it’s treated.

LN: I grew up in a world where the majority of people were black so that wasn’t the defining quality of anyone. When you’re describing someone, you don’t start out with “he’s black, he’s white.” No, I was a girl, I was my ethnic group Luo, I was middle class, I was many things before I was black, so it was like a rearrangement when I came here and realized that in America that’s the first thing that people notice about me. You don’t hear that word, “black, black” very often in Kenya to tell you the truth, so that was definitely jarring.

CNN: “12 years A Slave” is your first feature film. Where do you go inside yourself to play a role like that of Patsey with such generosity of spirit?

LN: I don’t believe that we are really as individual as we think we are and that’s what makes the profession of acting possible — that we can empathize with things that are more than our personal, limited experience. And I think that you do work and like Oprah [Winfrey] said to me, “you let God walk in the door.” I think it’s less about going into myself than opening myself; just opening myself to the research, the script, the autobiography, the other things that I read, the other things I saw and just trying to immerse myself in a world that I personally don’t know — but I know that my spirit does — and can know if I allow myself to open up to it.

“”There is something about acting that’s mysterious and magical.”
Lupita Nyong’o

There is something about acting that’s mysterious and magical because there is only so much I can do to prepare and then I have to just let go and breathe and believe that it will come through.

Because I think if I had been required to play Patsey in any sort of methodical way where I go in and I never go out until we wrap the picture, I don’t think I would have survived emotionally because it’s heavy. But having those moments of lightness and separation from the work we were doing on set was very important, even to fortifying our trust for each other while we were doing the work..

CNN: How do you feel about all the hype surrounding you since you since “12 Years A Slave”?

LN: I didn’t know how, and we all didn’t know how the world would take this film. It’s not easy subject matter. It’s heavy but it’s beautiful and you hope that people would at least open their eyes to see it — and then they did. So my first feeling was relief that it had been so well received and then they just kept receiving it and celebrating it and the conversation has been developing and shifting; it’s been so exciting and for me to be part of that celebration and my work to be lauded in all these ways has been amazing.

And I’ve felt relief as well that people are registering Patsey’s loftiness — in praising me I feel like her spirit is being uplifted, really, because what I met in those pages of Solomon Northup’s book was heartbreaking — and it still breaks my heart — and inspiring, and I had the privilege of bringing her back to life. I’m just happy and filled with gratitude to have had the experience in the first place and for it to be so well received.