Kenyan actress Lupita Nyong’o is definitely going places with her career as an actress. The former Face of Africa beauty who is a graduate of Yale School of Drama has featured in a couple of impressive Hollywood movies starting off with Steve McQueen’s “12 Years a Slave” which stars Hollywood big shots Brad Pitt, Paul Giamatti, Michael Fassbender among others  and happens to be based on a true story. In this movie, Lupita plays the role of Patsey , Master Epps’ (Michael Fassbender) slave.

Chiwetel Ejiofor, Brad Pitt, Michael Fassbender and Benedict Cumberbatch star in the film from Regency Enterprises and River Road that’s based on the true story of one man’s fight for survival and freedom in pre-Civil War America.

It centers on Solomon Northup (Ejiofor), a free black man from upstate New York who is abducted and sold into slavery. Solomon faces cruelty (personified by a malevolent slave owner played by Fassbender) as well as unexpected kindness. In the 12th year of his unforgettable odyssey, Solomon’s chance meeting with a Canadian abolitionist (Pitt) will forever alter his life. 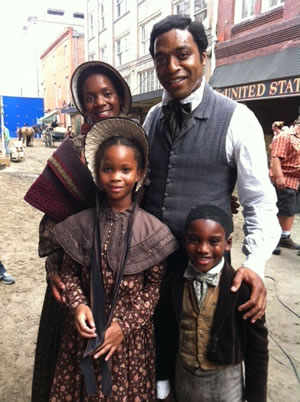 John Ridley penned the screenplay that’s based on the book by Northrup.