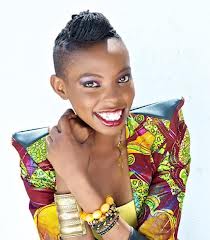 Raped by a stranger, losing her mother, Mary Onyango to breast cancer… Radio presenter Adelle Onyango, 23, talks poignantly of the double blow life has dealt her.

Four years ago, in 2008, I was raped by a stranger. My girlfriends and I had left a house party to hit a club in Westlands, Nairobi. When I realised that I had left my phone in the friend’s car that had dropped us off, I told my friends I was going to get the phone. I left them at club Changes and walked towards another club, The Gypsies down Electric Avenue, where our pal had parked his car.

As I walked down the street, a man approached me from some shop stalls nearby. He was neat looking and polite and asked if he could walk me to wherever I was going. I politely declined the offer and went on my way.

I saw him following me but I didn’t think much of it until we got to the back route of the nearby police station and I saw him inch closer. He pushed me down onto the ground and forced himself on me. What happened next is a blur. When he was done, he ran away.

I have never told anyone that I was raped except my friends who I was with that night. They took me to hospital. I chose to keep the happenings from my mum who was then ailing because I didn’t want to worry her. I only told her last year.

She was understandably very distraught, and held me as only a mother could. She reassured me that everything would be alright.

My mother was my best friend. She understood me. It is hard talking about her in the past tense. She talked to me about anything and everything, from dating and poetry to my career.

My mother was first diagnosed with breast cancer in 1999, when I was about 10 years old. She did not hide anything from us and told us everything about the disease. I wasn’t scared, maybe because she was so open about it. When someone keeps something a secret it always implies it is serious.

One day at school, a friend told me my mother was going to die. I was so shocked. I cried and wailed hysterically. When my father came to pick us up, I asked him why he did not tell us that Mum was going to die. My elder sister Amanda asked me what had brought this on, and I told her what my friend had said. Since then she made it her mission to always protect me.

To keep Mum’s spirits up, I would draw pictures for her and make nice little cards. That year, we celebrated our birthdays in hospital. My mother, father and I all have birthdays in February.

After being discharged from hospital, my mother received chemo and radio therapy as an outpatient. The therapy took a tremendous toll on her body. Her palms and the soles of her feet were cracked and she lost her hair. That is how she came to wear her signature head wraps.

By 2002, the cancer had disappeared. Mum had to take medication every day for about five years, by which time the doctor assured us that the cancer was gone.

Our lives went back to normal. My mum had a thing for furniture and she liked dragging me off on window-shopping

escapades. I did not mind at all. Being the last born in a family of three daughters, I was babied quite a bit. I am not ashamed to say it because I enjoyed it.

Unfortunately, during this period, my parents decided to divorce. At first I was really angry about it because my dad and I were close. But I understood my mum. My dad was very abusive with my mother and he was an alcoholic. When I look back, I can say that he was a good dad but a not-so-good husband. Mum sat us down and told us that she wanted and needed to be happy for us. The divorce was rather ugly though, and I refused to stick around to see it all. I chose to enroll in high school in Botswana. Even now, we rarely see my dad.

Being a household full of ladies, we all grew closer and closer to Mum. I think all girls grow closer to their mothers as they get older.

In 2008, the cancer resurfaced. I came home at midnight one night to find Mum acting very edgy. She was never the type to shout at any of us, but that night she shouted at me. She was really angry. I went to bed, telling myself we would talk in the morning.

That morning she woke up very early and left for work so I did not get the opportunity to talk to her as I hoped. She later called me during the day to tell me that she was checking herself into hospital. She told me that the cancer had re-surfaced. I was horrified. I immediately left for Nairobi Hospital to go and see her.

When I got to the reception, I asked them where my mum, Mary Onyango, was. They told me that no person of that name had checked into the hospital. I tried phoning her but she did not pick up.

She later explained that she was at a restaurant having lunch because she was hungry.

I later found her in her assigned hospital room. All this time I was fighting my tears. But when I saw her on her hospital bed, I immediately burst into tears. The doctor explained to us that the cancer had reached her lungs and that she needed treatment immediately. She then resumed the radio and chemo therapy.

This time it was obvious that things were harder on her, physically and financially. I was then in university, at USIU, doing my degree in public relations and psychology. The first time we were in this situation, my dad was around which made the financial burden manageable. But my mum was a tough cookie, and she managed things just fine. I graduated from university.

By December last year she had become really weak. At some point, just to visit her in the bedroom, we had to wear masks. Her immunity had been compromised and she was very susceptible to infections. She could hardly eat because throat sores made it painful for her to swallow.

One day, my eldest sister Anne-Marie called to tell me Mum had been admitted to hospital. I had two hours left before my radio show was over. I could barely concentrate I was so worried. When I finished my show, I dashed over to the hospital to see her. Mum had been admitted to the high dependency unit. She was unconscious and attached to scores of machines. I thought she was dying and I tried hard not to cry. But no sooner had my grandmother arrived than I started crying. She was later moved to the intensive care unit and after a few days she was released.

My eldest sister got married that December. My mother made sure she had fun that day. You could not imagine she was the same person who before the wedding was in hospital connected to pipes and machines. She looked nothing like an ailing person. That morning she helped with the floral arrangements. She really loved flowers, and at the ceremony she danced and made merry.

We had made a rule with Mum that she should not travel when she was having her treatment. The Thursday before she passed on, she broke that rule. She called me at work to tell me she had arrived. “Arrived where?” I asked her. She told me she was in Kisumu, dalla as we popularly call it. I tried not to be angry and made sure I would text to check up on her, even that Friday, I knew all was well with her and there was nothing to worry about.

The Saturday that she passed on, I was at home with my sister Amanda. I had slept in. I woke up to the news that Mum had been rushed to hospital. I wasn’t really alarmed by the news. But then Amanda got a second call. She just looked at me. She didn’t need to say a word. I then knew that Mum was gone. I took a duvet and a note book and sat down in front of the television. Then the reality began to sink in and I cried.

On days I do not want to get out of bed, My boyfriend Chris gives me a dose of tough love and forces me to get up, eat and get a move on.

In 2010, I started the ‘No Means No’ Campaign to raise awareness of rape. At the time, no-one knew that it was inspired by a personal experience. Now they know. I hope to have men as the face of the campaign. My mum told me that we as women can only influence a fellow woman’s mindset. I do not know anything about being a man, which is why I believe we need men to talk to men about rape. They understand each other best. A wise woman my mum was.

I hope women who have gone through a rape ordeal like me will be able to talk about it. It is why I started this campaign. We are active on Fac-book and Twitter (Adelle Onyango and AdelleO respectively).

I felt very alone when it happened to me, and it was not a good place to be emotionally. So I understand firsthand what it’s like. I work with two therapists and we offer free counselling to rape victims. My mum taught me to be strong and I now take on life with the same positivity and enthusiasm that she did.